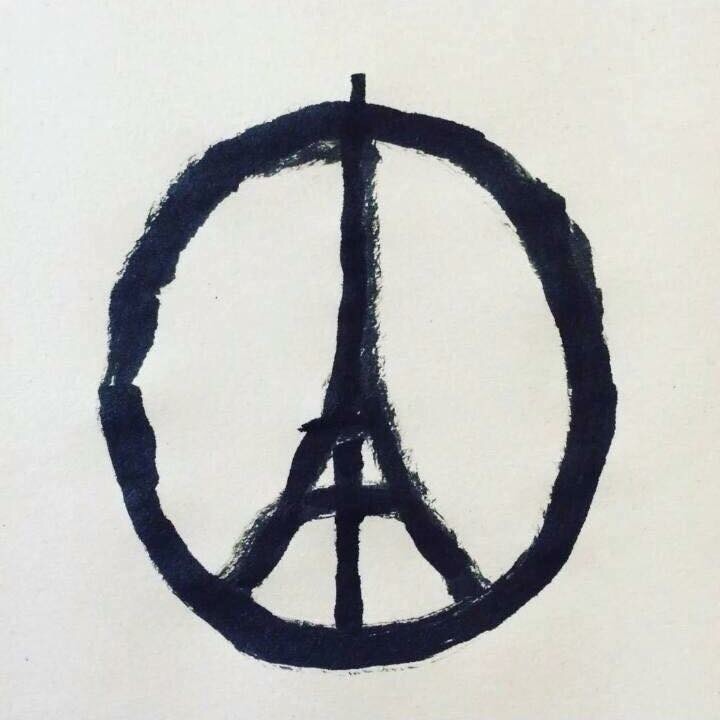 I really have no words this week – so I leave you with Sara Teasdale’s poem written during World War I.

There Will Come Soft Rains

There will come soft rains and the smell of the ground,

And swallows circling with their shimmering sound;

And frogs in the pools singing at night,

Robins will wear their feathery fire

Whistling their whims on a low fence-wire;

And not one will know of the war, not one

Will care at last when it is done.

Not one would mind, neither bird nor tree

And Spring herself, when she woke at dawn,

Would scarcely know that we were gone.

My friend Tom Vignieri set it to music at my suggestion. 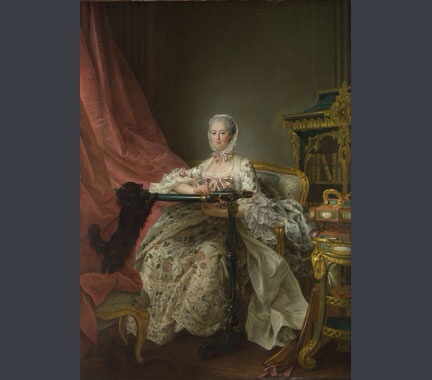 I have always loved thes gorgeous Sèvres elephant vases at The Metropolitan Museum of Art. Only 22 remain in collections today and due to their complexity, they were produced in a very limited quantity. Dating to about 1758, the two examples below are of soft-paste porcelain and were the work of the modeler Jean-Claude Duplessis (ca. 1695–1774).  Much favored by the French court, owners included Madame de Pompadour who owned 3 sets! 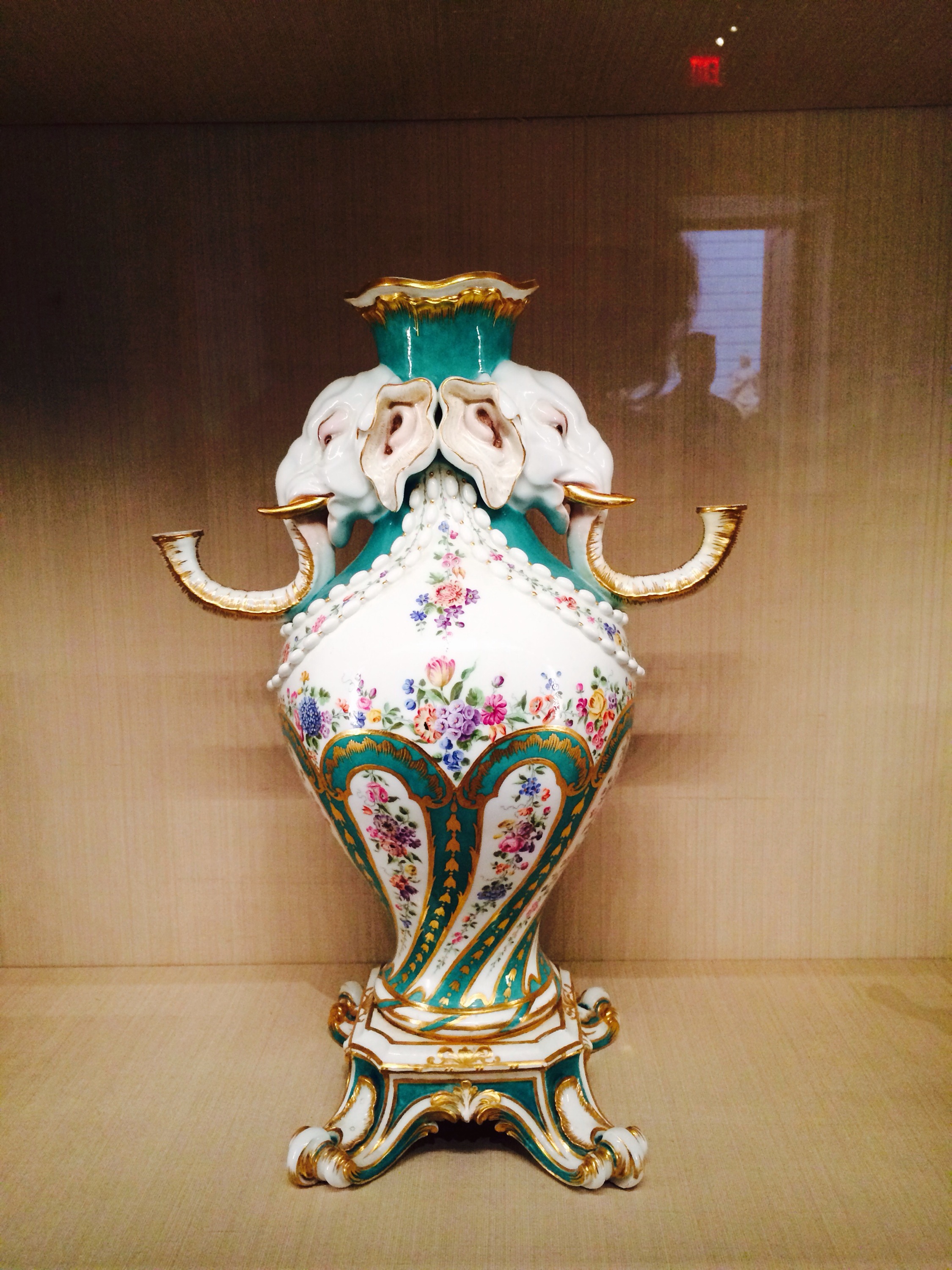 Madame de Pompadour, mistress to Louis XV,  had retreat away from the Court, the Petit Trianon, a small palace built for her by the king.

Though by the early1750s she was no longer the king’s mistress, she over saw new construction at Versailles as well as recommending the establishment of the Sèvres porcelain factory.

In her honor I also share some gorgeous images of orchids from The New York Botanical Garden show earlier this year.  None of these are the Dendrobium Orchids actually named Madame Pompadour, but they are quite beautiful and I think she would approve. 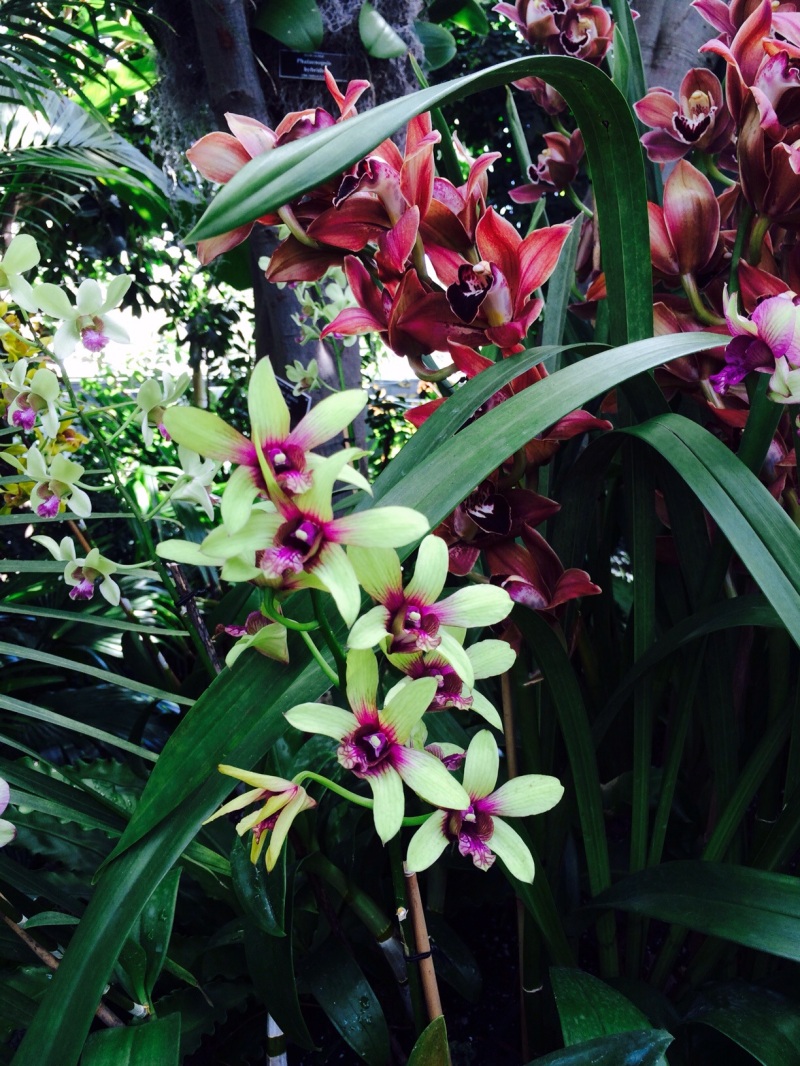 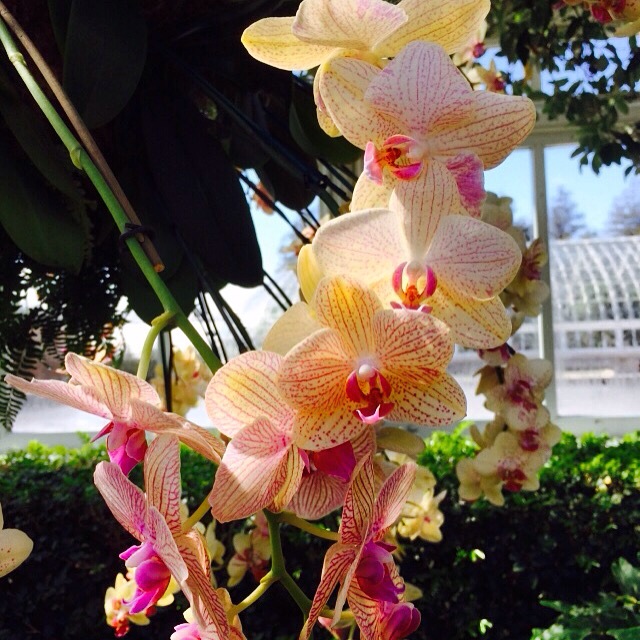 Yesterday I took a trip to The Cloisters – a part of a The Metropolitan Museum of Art way up in Inwood in gorgeous Fort Tryon Park and along the Hudson River. 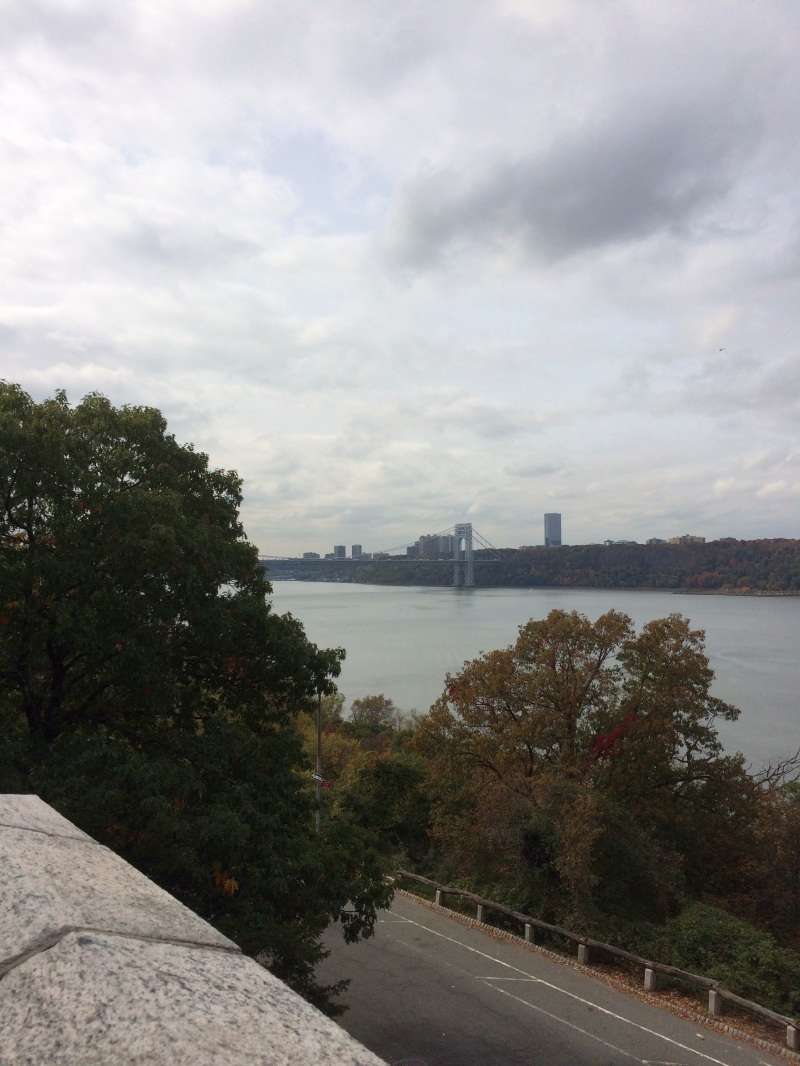 One of my favorite paintings is there – The Merode Altarpiece by the Workshop of Robert Campin (or the Master of Flémalle) – one of his assistants was the young Rogier van der Weyden.  I could spend hours taking in each detail of this Annunciation scene packed with symbolism. For example, St. Joseph, in the panel on the right, works in his carpentry shop and has built a mousetrap. The trap  –  an illusion to the Crucifixation and St. Augustine’s analogy of the Cross as the Devil’s mousetrap.

And this angel from the north transept portal of the cathedral of Saint-Lazare at Autun. Named for Lazarus – Christ’s friend raised from the dead in a miracle. It is the season of celebrating memories of the dead – Halloween, Dia de los Muertos  – decorations and altars are all around the city. 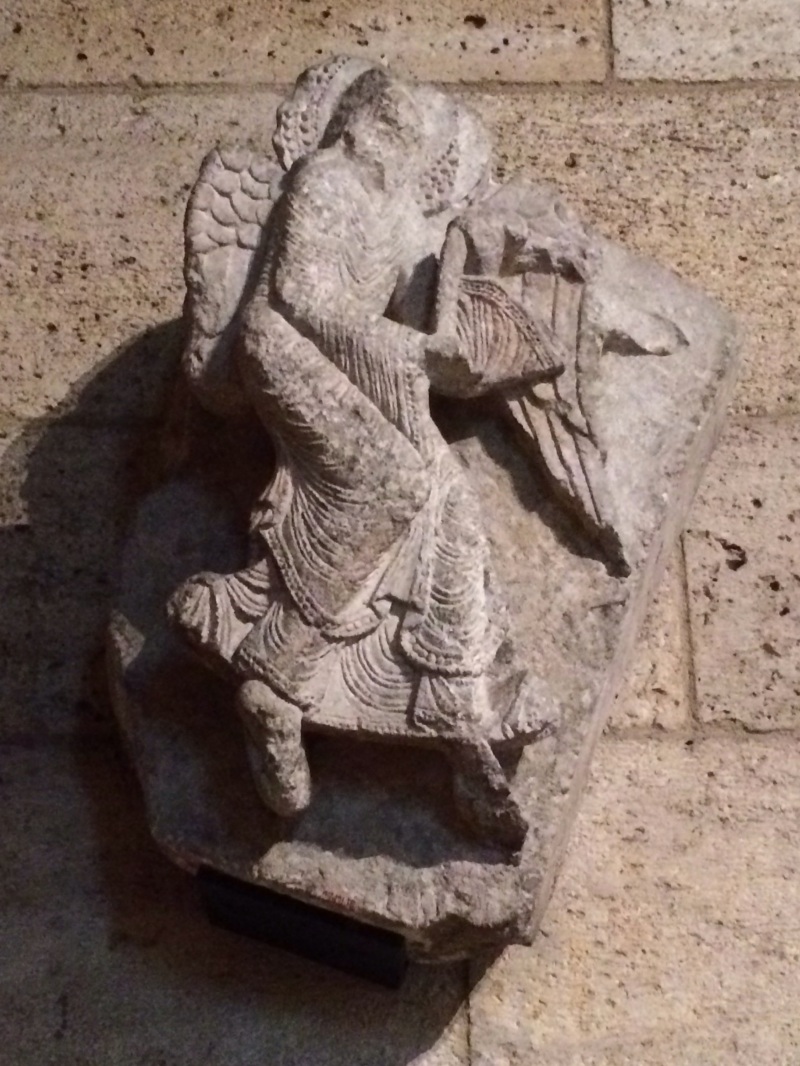 How will you celebrate the holiday or honor your dead?

I leave you with “Lady Lazarus” by Sylvia Plath
I have done it again.

One year in every ten

I manage it——
A sort of walking miracle, my skin

Bright as a Nazi lampshade,

My right foot
A paperweight,

My face a featureless, fine

Jew linen.
Peel off the napkin

Do I terrify?——
The nose, the eye pits, the full set of teeth?

Will vanish in a day.
Soon, soon the flesh

The grave cave ate will be

At home on me
And I a smiling woman.

I am only thirty.

And like the cat I have nine times to die.
This is Number Three.

To annihilate each decade.
What a million filaments.

Shoves in to see
Them unwrap me hand and foot——

Gentlemen, ladies
These are my hands

I may be skin and bone,
Nevertheless, I am the same, identical woman.

The first time it happened I was ten.

It was an accident.
The second time I meant

To last it out and not come back at all.

I rocked shut
As a seashell.

They had to call and call

And pick the worms off me like sticky pearls.
Dying

I do it exceptionally well.
I do it so it feels like hell.

I do it so it feels real.

I guess you could say I’ve a call.
It’s easy enough to do it in a cell.

It’s easy enough to do it and stay put.

That knocks me out.

For the hearing of my heart——

It really goes.
And there is a charge, a very large charge

For a word or a touch

Or a bit of blood
Or a piece of my hair or my clothes.

So, so, Herr Doktor.

So, Herr Enemy.
I am your opus,

I am your valuable,

The pure gold baby
That melts to a shriek.

I turn and burn.

Do not think I underestimate your great concern.
Ash, ash—

You poke and stir.

Flesh, bone, there is nothing there——
A cake of soap,

Beware.
Out of the ash

I rise with my red hair

And I eat men like air.
Sylvia Plath, “Lady Lazarus” from Collected Poems. Copyright © 1960, 1965, 1971, 1981 by the Estate of Sylvia Plath. Editorial matter copyright © 1981 by Ted Hughes. Used by permission of HarperCollins Publishers.

Animals, animals everywhere – beasts magical, mythical as emblems of human power and status. Below is the Este family crest emblazoned with two white eagles as well as six fleur de lys and exhibited by two rampant leopards with a third perched on top of the helmet. A white ribbons binds his eyes symbolizing  loyalty as this panel was likely a gift to someone in the court of Philip the III, Duke of Burgundy (1369 -1467). This is the obverse of a Rogier van der Weyden portrait of Francesco d’Este painted around 1460 and in the collection of the Metropolitan Museum of Art. 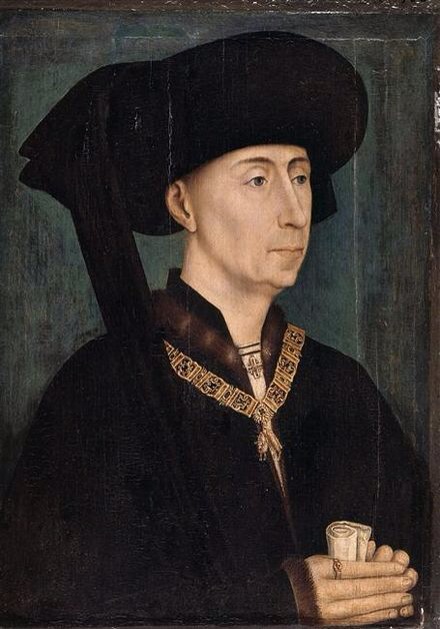 And in Vienna, outside the Hofburg Palace’s Imperial Treasury gilded griffins exhibit the coat of arms of the king of the Romans in honor of Ferdinand the I, a Holy a Roman Emperor.

Inside, a talberd for the Herald of the King of Bohemia with a rampant lion exquisitively embroidered in gold thread on red velvet.

As the weather turns colder in New York I had a last outing to the beach yesterday – the only beasts there were many varieties of seagulls, but the light on the water was spectacular. 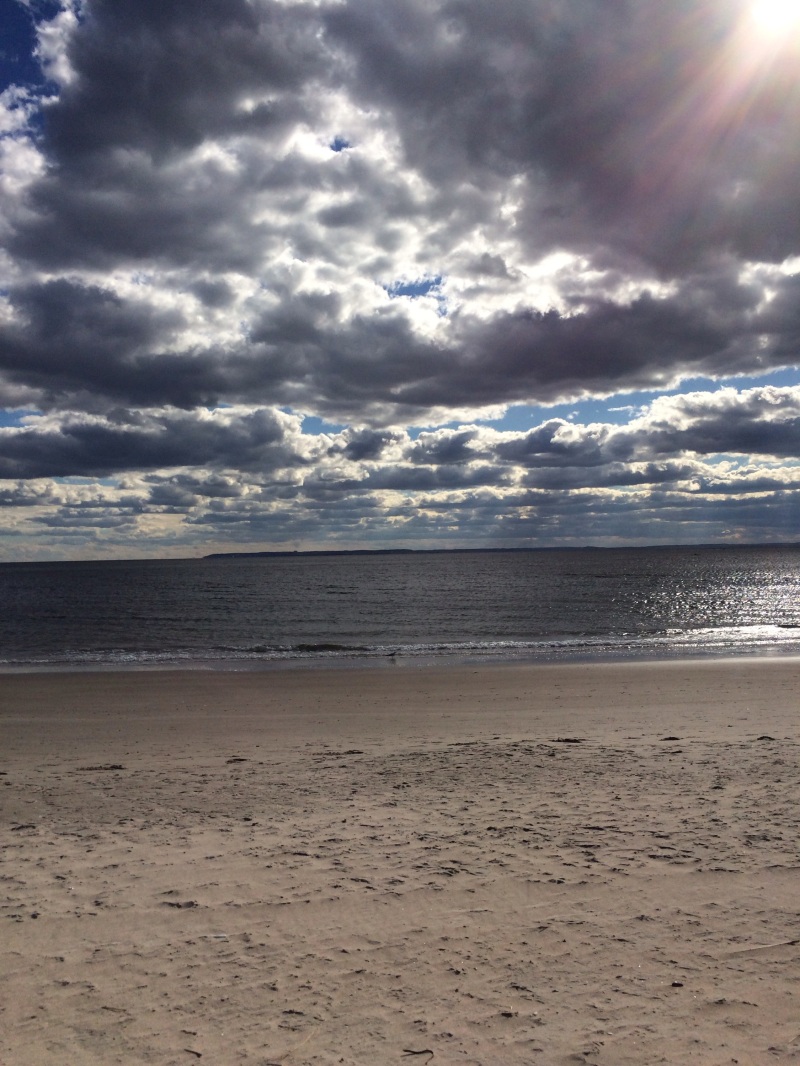 A Room of One’s Own

It’s been a long time since I read Virginia Woolfe – probably time to dip into her writings again.

Below are images of my favorite period room at the Metropolitan Museum of Art. If only it was my own room. I adore the soft blue that is so calming mixed with the playful floral motifs and the golden accents framing every panel. The alcove seems the perfect place to read and contemplate and with a small desk on the opposite side for writing. A perfect tiny world!

This tiny but precious paneling lined boudoir walls were created for Louis-Marie-Augustin, fifth duc d’Aumont (1709 – 1782). The room was in an unfinished townhouse he rented in 1776 that was constructed for the builder Louis-François Trouard (1729 – 1794 ) and designed by Jacques-Ange Gabriel (1698 – 1782) standing in what is now the place de la Concorde in Paris. The interior design was the work of the architect Pierre- Adrien Pâris. Only six years later the hôtel was purchased by François-Félix-Dorothée des Balbes de Berton, comte de Crillon (1748 – 1820) remaining in their family until the early 20th century.

And speaking of hotels, but not the private townhouse type in Paris, this weekend I am staying at The Pfister Hotel in Milwaukee for my step-sister’s wedding here. Gorgeous painted ceilings and very ornate furnishings throughout the older portion of hotel. Be sure to visit even if just for a look if you’re in downtown Milwaukee.