Weaving a story, weaving a tapestry, I’m thinking of women, weaving and spinning this weekend after a conversation with an archaeologist led to reading a paper about identifying tomb occupants by gendered grave goods such as spindle whorls. Most of the weavers in cultures around the world have been women, though there are exceptions, such as the male Navaho weavers. According to legend, Maya women learned their craft from the moon goodness Ix Chel. 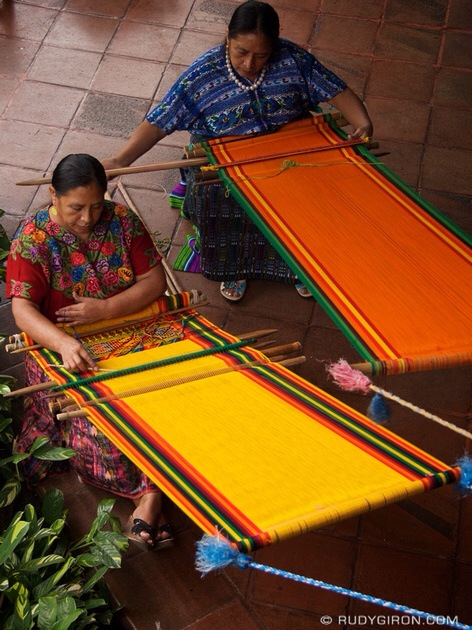 Weaving and spinning are everywhere in myth and legend. In Homer’s Odyssey there is the story of Penelope”s weaving and then unraveling a burial shroud for Odysseus’ father to fend off the suitors who wish to marry her and thus control Ithaca. 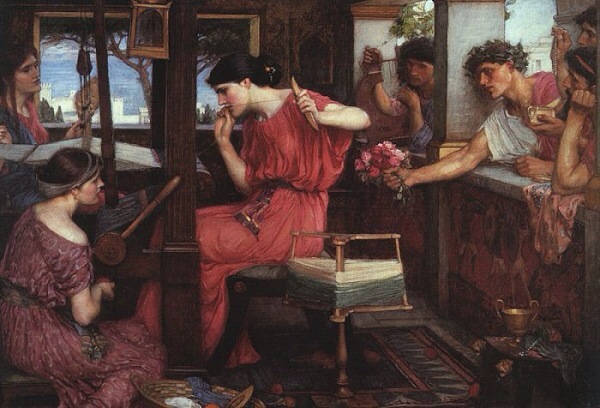 The Lady of Shalott is another weaver but rather than unraveling her work, she unravels her life. Her ability to create her tapestries is destroyed when she gazes on Sir Launcelot. Both women have power. Penelope to accept a suitor and form a new alliance for Ithaca, but her faithfulness to Odysseus and belief in his eventual return is the cause of her ruse with the shroud. For The Lady of Shalott, her craft can only be practiced if she remains isolated and removed from the world. She must view events indirectly through her mirror and weave them into her tapestries. She loses this power when the knight, Sir Lancelot, rides by and she cannot resist looking directly upon him.

Weaving and shrouds and death – women as creators and as pawns. Enjoy Tennyson’s poem below and part two of weaving women next week.

Part I.
On either side the river lie

Long fields of barley and of rye,

That clothe the wold and meet the sky;

And thro’ the field the road runs by

And up and down the people go,

Gazing where the lilies blow

Round an island there below,

The island of Shalott.

Thro’ the wave that runs for ever

By the island in the river

Flowing down to Camelot.

Overlook a space of flowers,

And the silent isle imbowers

By slow horses; and unhail’d

Skimming down to Camelot:

But who hath seen her wave her hand?

Or at the casement seen her stand?

Or is she known in all the land,

The Lady of Shalott?

In among the bearded barley,

Hear a song that echoes cheerly

From the river winding clearly,

And by the moon the reaper weary,

Part II.
There she weaves by night and day

A magic web with colours gay.

She has heard a whisper say,

A curse is on her if she stay

To look down to Camelot.

She knows not what the curse may be,

And so she weaveth steadily,

And little other care hath she,

And moving thro’ a mirror clear

That hangs before her all the year,

Shadows of the world appear.

There she sees the highway near

Winding down to Camelot:

There the river eddy whirls,

And there the surly village-churls,

And the red cloaks of market girls,

Sometimes a troop of damsels glad,

An abbot on an ambling pad,

Or long-hair’d page in crimson clad,

Goes by to tower’d Camelot;

And sometimes thro’ the mirror blue

She hath no loyal knight and true,

But in her web she still delights

To weave the mirror’s magic sights,

For often thro’ the silent nights

A funeral, with plumes and lights

And music, went to Camelot:

Or when the moon was overhead,

“I am half-sick of shadows,” said

Part III.
A bow-shot from her bower-eaves,

He rode between the barley-sheaves,

And flamed upon the brazen greaves

A redcross knight for ever kneel’d

To a lady in his shield,

That sparkled on the yellow field,

Hung in the golden Galaxy.

As he rode down to Camelot:

And from his blazon’d baldric slung

And as he rode his armour rung,

All in the blue unclouded weather

The helmet and the helmet-feather

As he rode down to Camelot.

As often thro’ the purple night,

Below the starry clusters bright,

On burnish’d hooves his war-horse trode;

From underneath his helmet flow’d

His coal-black curls as on he rode,

As he rode down to Camelot.

From the bank and from the river

He flash’d into the crystal mirror,

“Tirra lirra,” by the river

She made three paces thro’ the room,

She saw the water-lily bloom,

She saw the helmet and the plume,

She look’d down to Camelot.

Out flew the web and floated wide;

The mirror crack’d from side to side;

“The curse is come upon me,” cried

The pale-yellow woods were waning,

The broad stream in his banks complaining,

Down she came and found a boat

Beneath a willow left afloat,

And round about the prow she wrote

And down the river’s dim expanse –

Seeing all his own mischance –

With a glassy countenance

Did she look to Camelot.

And at the closing of the day

She loosed the chain, and down she lay;

The broad stream bore her far away,

That loosely flew to left and right –

The leaves upon her falling light –

Thro’ the noises of the night

She floated down to Camelot:

And as the boat-head wound along

The willowy hills and fields among,

They heard her singing her last song,

Till her blood was frozen slowly,

And her eyes were darken’d wholly,

For ere she reach’d upon the tide

The first house by the water-side,

Singing in her song she died,

Under tower and balcony,

By garden-wall and gallery,

A gleaming shape she floated by,

A corse between the houses high,

Out upon the wharfs they came,

Knight and burgher, lord and dame,

And round the prow they read her name,

Who is this? and what is here?

And in the lighted palace near

Died the sound of royal cheer;

And they cross’d themselves for fear,

All the knights at Camelot:

But Lancelot mused a little space;

He said, “She has a lovely face;

God in his mercy lend her grace,

The Lady of Shalott.”