I went to The Metropolitan Museum of Art of a rainy day this week when it was relatively calm and quiet – most galleries I had to myself – perfect for the contemplation of art. And this is not usually possible when there is a mad crush of people in the rooms.  By steering clear of special exhibits most of the permanent collection, with the exception of the Egyptian rooms, can be enjoyed crowd free during weekdays now that summer has ended. 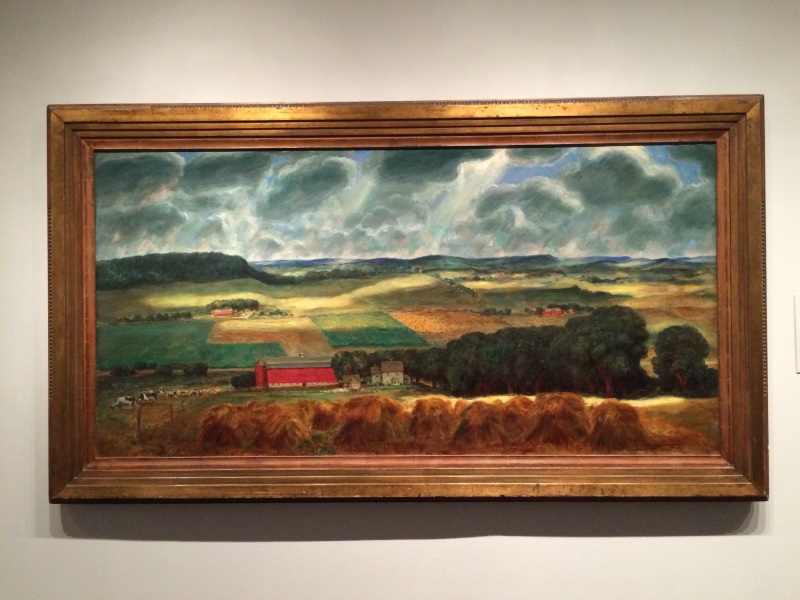 I grew up in Wisconsin and Iowa – in a suburb of Milwaukee and then later in Cedar Rapids, Iowa. And finally a stint in Missouri while attending Washinton University in St. Louis. After a summer in Washington, DC interning at the now defunct Corcoran Gallery of Art, I was more determined than ever to move to the East Coast. So by the next summer I was living in Boston.

But I still had my family in Wisconsin and Iowa, so there have been many trips back – some in summer when the fields look as gorgeous as they do in Curry’s landscape above. And other times in late December when the fields are frozen and covered in crisp white snow and the few remaining red barns stand out as cardinals do amidst the more modest plumage of their avian companions. 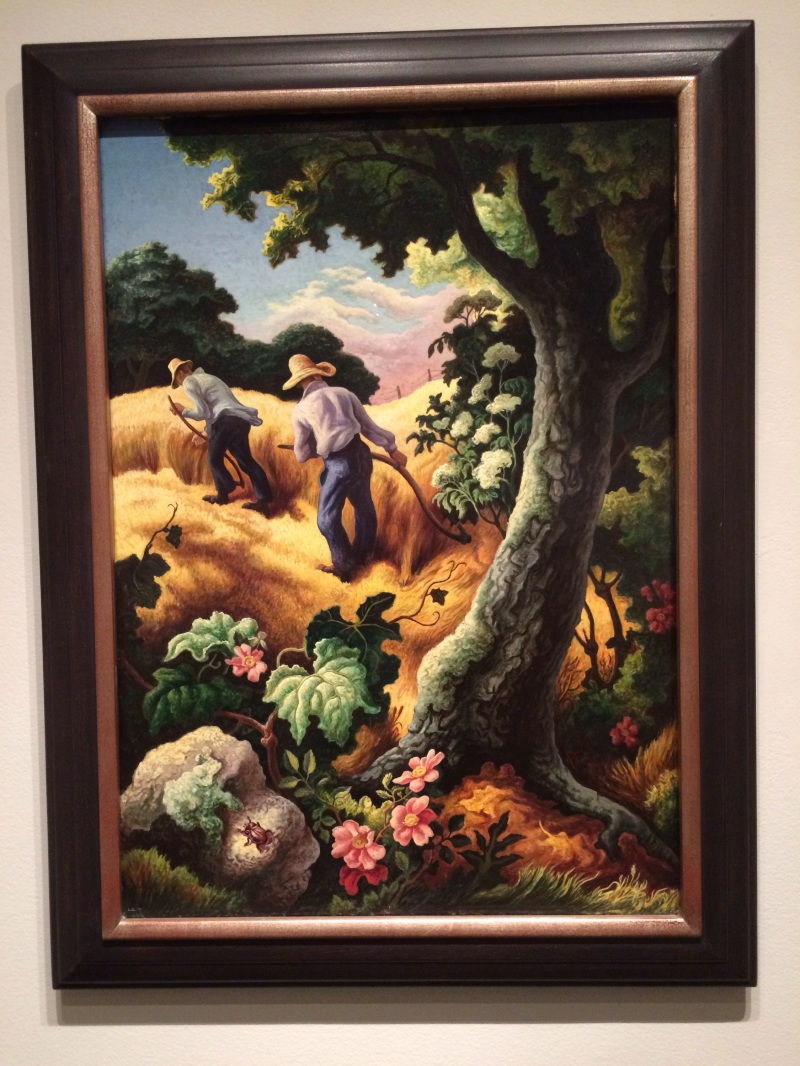 And Missouri landscapes such as Thomas Hart Benton’s July Hat harken back to Pieter Bruegel the Elder’s The Harvesters. Though Benton’s figures and the land have that strange twisted aspect, almost Mannerist in feel, but contorted in a more compact way. 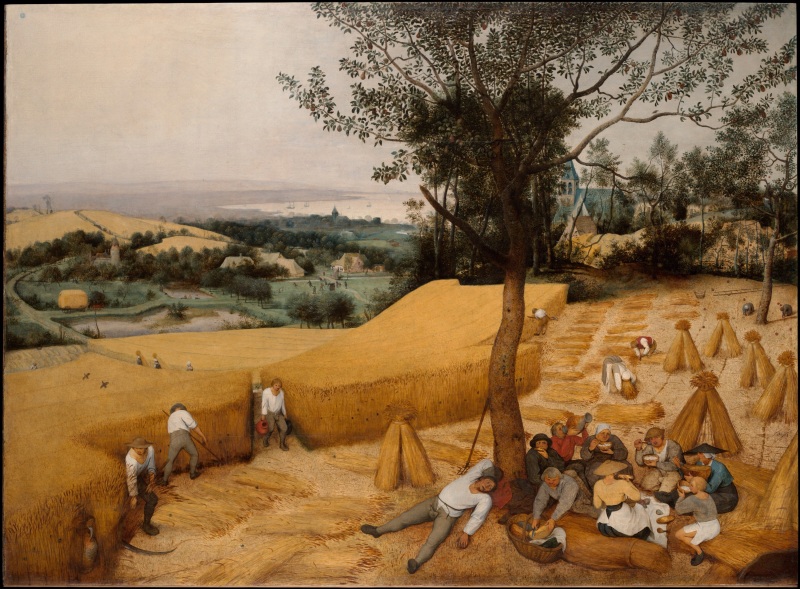 And finally the last in the trio of Regionalists, Grant Wood, who lived and had his artist’s studio for many years in Cedar Rapids at 5 Turner Alley. 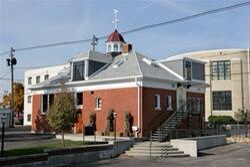 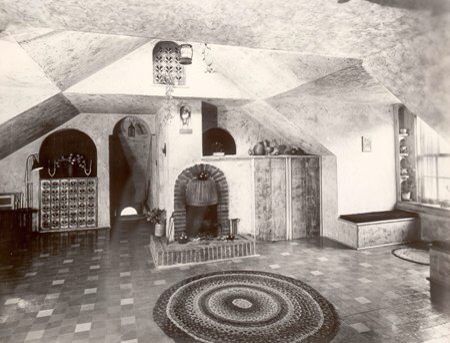 Here again as with Benton, and unlike the realism of Curry, we have a contrived bird’s eye view of a little Massachusetts hamlet. Cartoonish hills and rounded surveys set against the angular architecture and a huge spotlight on the town center – the light of an over bright moon to light Paul Revere’s way? Wood subject derives from history by way of Henry Wadsworth Longfellow. And so full circle from the Midwest to the East Coast. Enjoy the poem! 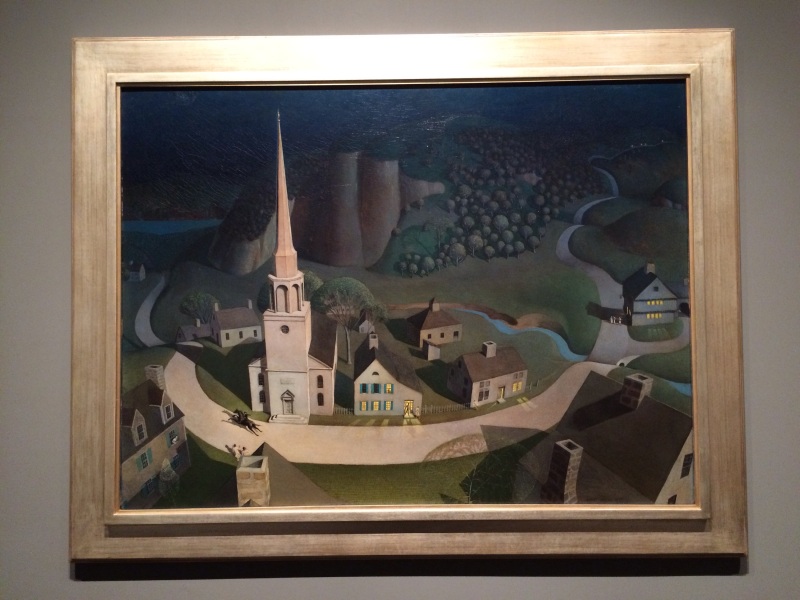 Listen my children and you shall hear

Of the midnight ride of Paul Revere,

On the eighteenth of April, in Seventy-five;

Hardly a man is now alive

Who remembers that famous day and year.

He said to his friend, “If the British march

By land or sea from the town to-night,

Hang a lantern aloft in the belfry arch

Of the North Church tower as a signal light,–

One if by land, and two if by sea;

And I on the opposite shore will be,

Ready to ride and spread the alarm

Through every Middlesex village and farm,

For the country folk to be up and to arm.”

Then he said “Good-night!” and with muffled oar

Silently rowed to the Charlestown shore,

Just as the moon rose over the bay,

Where swinging wide at her moorings lay

A phantom ship, with each mast and spar

And a huge black hulk, that was magnified

By its own reflection in the tide.

Meanwhile, his friend through alley and street

Wanders and watches, with eager ears,

Till in the silence around him he hears

The muster of men at the barrack door,

The sound of arms, and the tramp of feet,

And the measured tread of the grenadiers,

Marching down to their boats on the shore.

Then he climbed the tower of the Old North Church,

By the wooden stairs, with stealthy tread,

To the belfry chamber overhead,

And startled the pigeons from their perch

On the sombre rafters, that round him made

Masses and moving shapes of shade,–

By the trembling ladder, steep and tall,

To the highest window in the wall,

Where he paused to listen and look down

A moment on the roofs of the town

And the moonlight flowing over all.

Beneath, in the churchyard, lay the dead,

In their night encampment on the hill,

Wrapped in silence so deep and still

The watchful night-wind, as it went

Creeping along from tent to tent,

And seeming to whisper, “All is well!”

A moment only he feels the spell

Of the place and the hour, and the secret dread

Of the lonely belfry and the dead;

For suddenly all his thoughts are bent

On a shadowy something far away,

Where the river widens to meet the bay,–

A line of black that bends and floats

On the rising tide like a bridge of boats.

Meanwhile, impatient to mount and ride,

Booted and spurred, with a heavy stride

On the opposite shore walked Paul Revere.

Now he patted his horse’s side,

Now he gazed at the landscape far and near,

Then, impetuous, stamped the earth,

And turned and tightened his saddle girth;

But mostly he watched with eager search

The belfry tower of the Old North Church,

As it rose above the graves on the hill,

Lonely and spectral and sombre and still.

And lo! as he looks, on the belfry’s height

A glimmer, and then a gleam of light!

He springs to the saddle, the bridle he turns,

But lingers and gazes, till full on his sight

A second lamp in the belfry burns.

A hurry of hoofs in a village street,

A shape in the moonlight, a bulk in the dark,

And beneath, from the pebbles, in passing, a spark

Struck out by a steed flying fearless and fleet;

That was all! And yet, through the gloom and the light,

The fate of a nation was riding that night;

And the spark struck out by that steed, in his flight,

Kindled the land into flame with its heat.

He has left the village and mounted the steep,

And beneath him, tranquil and broad and deep,

Is the Mystic, meeting the ocean tides;

And under the alders that skirt its edge,

Now soft on the sand, now loud on the ledge,

Is heard the tramp of his steed as he rides.

It was twelve by the village clock

When he crossed the bridge into Medford town.

He heard the crowing of the cock,

And the barking of the farmer’s dog,

And felt the damp of the river fog,

That rises after the sun goes down.

It was one by the village clock,

When he galloped into Lexington.

He saw the gilded weathercock

Swim in the moonlight as he passed,

And the meeting-house windows, black and bare,

Gaze at him with a spectral glare,

As if they already stood aghast

At the bloody work they would look upon.

It was two by the village clock,

When he came to the bridge in Concord town.

He heard the bleating of the flock,

And felt the breath of the morning breeze

Blowing over the meadow brown.

And one was safe and asleep in his bed

Who at the bridge would be first to fall,

Who that day would be lying dead,

Pierced by a British musket ball.

You know the rest. In the books you have read

How the British Regulars fired and fled,—

How the farmers gave them ball for ball,

>From behind each fence and farmyard wall,

Chasing the redcoats down the lane,

Then crossing the fields to emerge again

Under the trees at the turn of the road,

And only pausing to fire and load.

So through the night rode Paul Revere;

And so through the night went his cry of alarm

To every Middlesex village and farm,—

A cry of defiance, and not of fear,

A voice in the darkness, a knock at the door,

And a word that shall echo for evermore!

For, borne on the night-wind of the Past,

Through all our history, to the last,

In the hour of darkness and peril and need,

The people will waken and listen to hear

The hurrying hoof-beats of that steed,

And the midnight message of Paul Revere.